The NoMa BID’s Gateways Project will use public art to transform a number of key intersections around the NoMa neighborhood into spaces that create positive experiences for pedestrians, cyclists, and drivers; provide a strong visual identity for the neighborhood; and celebrate the history and character of the neighborhood.

The idea of neighborhood gateways was first mentioned in the NoMa Public Realm Design Plan, published in 2012, and then expanded upon in the BID’s Strategic Plan 2016–2021, the result of two years of stakeholder engagement and visioning for the future of the neighborhood.

The New York Avenue / N Street / North Capitol Street NE gateway site (upper left in this image) was the first to receive an artwork, installed in July 2019 and described below. The New York Avenue / Florida Avenue NE and H Street / North Capitol Street NW sites are next on the priority list for the BID. Other gateway sites identified in the Strategic Plan will be explored in the years to come.

The Chicken and the Egg

New York Avenue / N Street / North Capitol Street NE
The Chicken and the Egg is inspired by the history of the NoMa neighborhood, a playful comment on the conundrum of ongoing change here, and suggestive of the role that transportation (of both goods and people) has had in those changes: Union Station opened in 1908, and Union Market Terminal, D.C.’s primary wholesale market, was part of the commercial development wave that followed. In 2004, a new Metro station opened, and in the years since, the area has become denser, more vibrant, and mixed-use. The cyan, magenta, yellow, and black (CMYK) colors used are indicative of the area’s history as a center of printing. Designer: Harry Mark, Principal, RSM — the firm that also designed our streetpole banners. 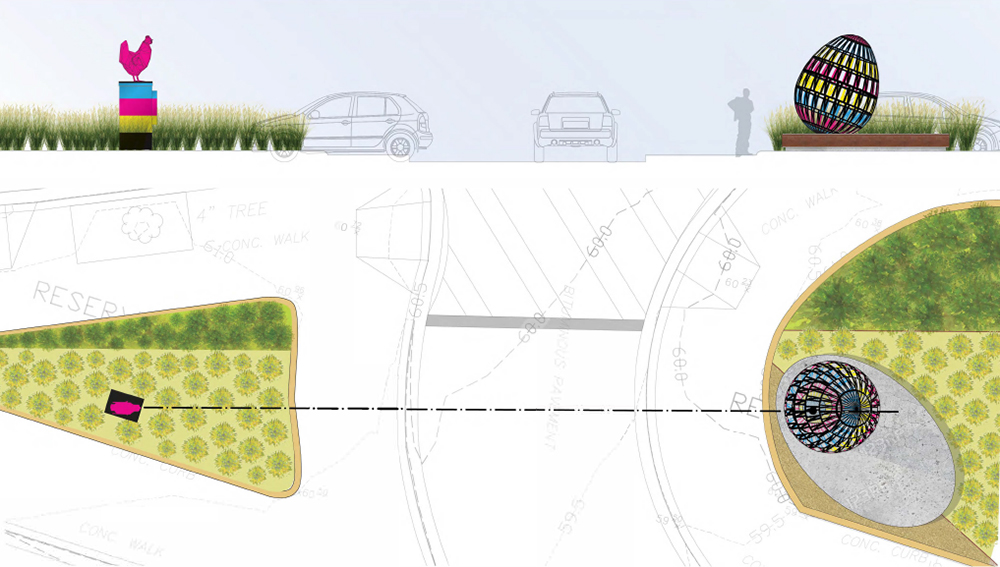